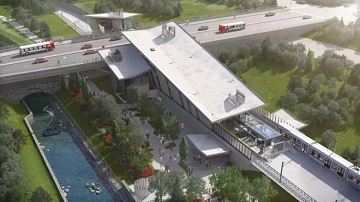 The letter is signed by Kevin Cinq-Mars, the president of Tomlinson. A company official confirmed the letter was sent, but declined any comment.

The payment dispute is not currently before the courts. The letter demanding payment ends with the hope the issue can be resolved “without the unnecessary expense and trouble of legal proceedings.”

Tomlinson is one of the largest construction firms in eastern Ontario. As the firm states on its website, it specializes in — among other things — “transportation infrastructure” like roads and highways and bridges.

The letter does not spell out the specific work Tomlinson carried out for OLRT Constructors, the construction arm of RTG. According to the construction company’s website, however, it worked largely on the civic works aspects of the giant project, such as widening Highway 417 between Nicholas Street and the split and replacing the Lees Avenue bridge.

Tomlinson also performed some shoring and excavation work at the western portal of the 2.5-kilometre tunnel at Pimisi Station. According to the company’s website, this work was done before the tunnelling work began.

In the short but pointed letter, Tomlinson states it “has a duty to pursue immediate payments of these funds for Tomlinson’s subcontractors.”