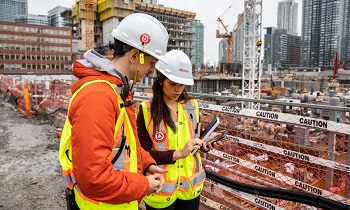 To attract a generation that grew up with cellphones and iPads, the construction industry goes high-tech

When mechanical engineer Vlad Rotaru leaves the office trailer at the Toronto construction site where he works, the most important tool he carries — apart from the hard hat and safety vest he wears — is his smartphone.

The 22-year-old graduated in April from the University of Ontario Institute of Technology in Oshawa, recently rebranded  the Ontario Tech University, and is now a mechanical-electrical-plumbing co-ordinator for Deltera.

He’s located on a project called The Well, a residential and commercial development in Toronto’s downtown core, one of the biggest job sites in Canada.

The technology on Rotaru’s cellphone makes his line of work “just all around less tedious,” he says.

His employer is one of growing number of construction companies to use web and mobile software applications to connect the back office to the construction site, collapsing data from armloads of technical drawings and countless spreadsheets and emails into something that fits in a back pocket.

That saves a lot of time and effort, he says. “You don’t have to climb up six levels of stairs to get a drawing.”

Tech tools are not only a way of saving time — and therefore money — they’re a critical part of attracting and keeping generation Z and millennial workers who have grown up expecting the efficiency afforded them by their iPads and smartphones. That’s especially vital for the trades, which are working hard to overcome a labour shortage that stems in part from a cultural bias that pushes young people toward university and office work.

“We have this perception that these are second-tier occupations, and they’re definitely not,” said Shaun Thorson, CEO of Skills/Compétences Canada, a non-profit that promotes careers in skilled trades and technology.