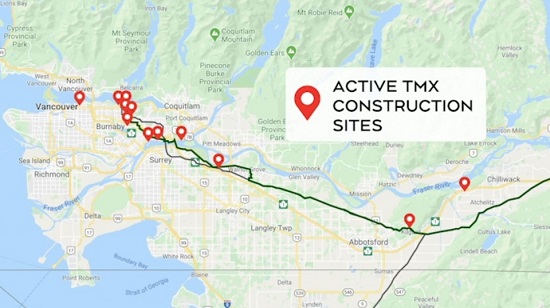 Indigenous leaders in British Columbia are reacting to Thursday’s disappointment in the Supreme Court of Canada by pledging to pursue new legal challenges against the Trans Mountain pipeline expansion, which is quietly under construction in the Lower Mainland.

Pipeline opponents were dismayed to learn the Supreme Court refused to hear an appeal of a previous ruling that found Ottawa’s 2019 approval of the project was sound, marking the end of a hard-fought battle.

But the Squamish Nation, Tsleil-Waututh Nation and Coldwater Indian Band told journalists that while they’ve reached the end of the line in their legal challenge around meaningful consultation and accommodation, particularly regarding environmental concerns, they will be back in court with other challenges to try and quash the project.

“This case is about more than just a risky pipeline and a tanker project,” said Chief Judy Wilson. “It is a major setback for reconciliation. It reduces consultation to a purely procedural requirement.”

When asked whether protests and other out-of-court options were under consideration by First Nations leaders, Wilson would only answer for herself.

“I don’t personally plan to do any protests outside the court, but I can’t promise the same for other people who believe in what we believe in or stand against the TMX project,” she said. “We will always go to court with clean hands.”

The controversial project, which would double the existing decades-old Trans Mountain pipeline, was bought by the federal government last year to facilitate more fossil fuel transportation from near Edmonton to a tanker terminal in Burnaby; tankers already take Alberta petroleum products to Asian markets from there. Support for the twinned TMX pipeline has been dropping since costs skyrocketed to more than $12 billion.