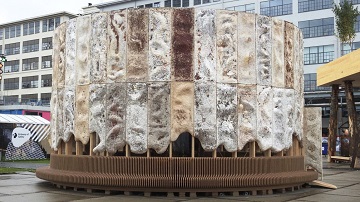 This mushroom building cleans our air as it grows

The round building looks something like a giant birthday cake coated in spiderwebs. It’s beautiful, yet a bit haunting. Look closer, though, and you’ll realize this structure has nothing but love for its surroundings. Because while materials ranging from concrete to insulation are wrecking our environment, the Growing Pavilion is made entirely from materials that grew on this planet.

That means the frame is timber; the flooring is built from panels of compressed cattails; and, as a pièce de résistance, the walls are mycelium, or the fungal root core we know better as a “mushroom” once it flowers to reproduce itself.

The Growing Pavilion debuted at the recent Dutch Design Week in Eindhoven. And the studio behind the building, Krown-design, specializes in producing structures and even furnishings out of mycelium. As Jan Berbee, cofounder of the company, explains over email, the standard rigid foam plastic EPS panels we see on most buildings emit three times their weight in CO2. But growing mycelium actually offsets the carbon footprint of a building, because mycelium captures twice its weight in CO2.

The growth process wasn’t that difficult. It required shaping molds and filling them with a hemp waste substrate the mycelium would grow on. These molds were large: six feet tall and nearly three feet wide. Over the course of only a week, the panels filled with mycelium, at which point they were baked to kill and cure the fungus, hardening the panel and ensuring it won’t grow wildly. The mycelium was then painted with a bio-based protective layer.