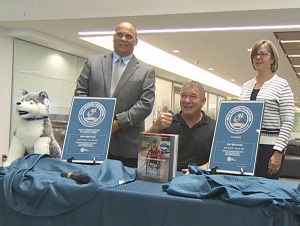 This downtown St. John’s building is one of the most accessible in Canada

As reported on CBC News, Husky Energy’s downtown St. John’s office space and the building it’s in have been recognized as being one of the most accessible work places in the country.

In 2017, Husky designed an accessible floor plan, which included colour-coded floors, better natural lighting for workers of all abilities, and adjustable workstations before moving into its 100,000-square-foot space at 351 Water St., managed by East Port Properties.

On Tuesday, the office and the property were awarded gold ratings for accessibility by the Rick Hansen Foundation. They’re the first two such awards in the province, according to the foundation, which has rated more than 1,200 buildings across the country.

“You’ll see so many amazing examples of how people use common sense, and practical and innovative opportunities,” Hansen, a former Paralympic athlete who circled the world in his wheelchair in the mid-’80s and now works to remove barriers to accessibility.

“Visitors, employees and customers can all be part of this journey, and that’s how real change takes place.”

Hansen wants to see accessibility considerations brought into the design phase so they becomes a normal part of the building process.

“When we get so many people from the construction and design industry buying into this new protocol for being able to be trained for accessibility, then the disabled community is not alone and they’re not fighting upstream against systemic issues,” he said.

He wants to see measures and protocol for accessible building design be adopted across the world.

Hansen said 1.3 billion people around the world have disabilities, with about 24 per cent of the world’s baby boomer generation living with a disability of some type.

“Buildings were built for people, and accessibility is a fundamental component of our society.”