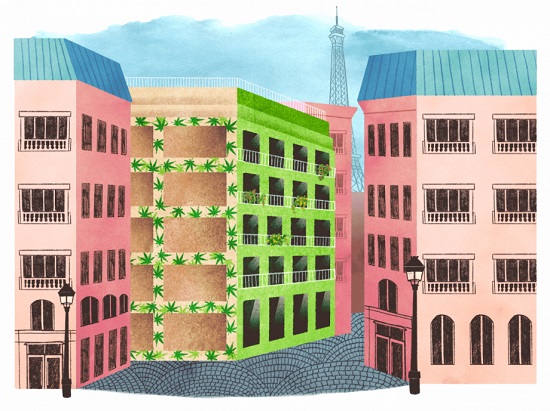 Winter in Paris is notoriously clammy, and this winter was no exception. But Gregory Ferembach didn’t need to turn on his heat much. One reason? The walls in his public housing building are lined with one of nature’s best insulation materials: hemp.

“We’re never cold in winter,” Ferembach said in French. “The kids walk around barefoot all the time, or even in their underwear.”

Ferembach says it helps that their apartment is on a middle floor, and their building is sandwiched between two others. But the coziness also owes to the unique material in their walls: “hempcrete,” a concrete-like blend made by mixing hemp hurd — the woody core of the cannabis plant — with water and lime. Despite the name, the material isn’t a direct substitute for concrete. But as an insulating material within walls, it holds the potential to transform the homes where we reside in ways that are healthier for people and the planet alike.

The building industry takes a staggering toll on the environment. It’s not just concrete, which is depleting the world’s sand, making cities more flood prone, and spewing a huge amount of greenhouse gases into the atmosphere along the way. There’s also the insulation in our walls, the vinyl coating our floors, and the laminates in our countertops, most of which are derived from fossil fuels and have a sizable carbon footprint. From the foundations to the roof, today’s buildings are part and parcel of our extractive economy.

And that’s just the construction. Factor in the energy used to power and heat them, and buildings are responsible for nearly 40 percent of global carbon emissions, according to the U.N.

John Washington, a Buffalo-based organizer for the Homes Guarantee campaign, says it’s critical that climate mitigation efforts address both sides of this equation.