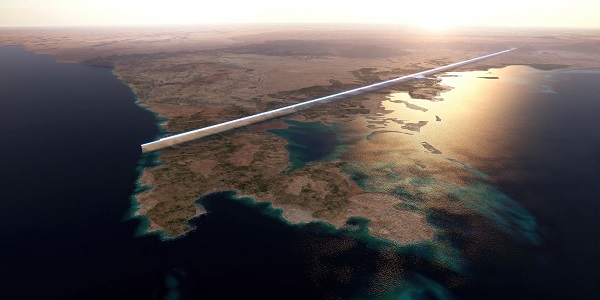 Saudi Arabian authorities have revealed plans for an architecture project so ambitious that it almost beggars belief. Named The Line, it would consist of a 170-km (105-mile)-long skyscraper that would serve as home to approximately 9 million people – or roughly the same as the population of New York City.

Putting aside all concerns on feasibility for now, The Line would be part of the larger Neom project and situated in northwest Saudi Arabia, near the Red Sea. We’ve no word on who’s responsible for the design, but Dezeen points the finger at Morphosis, which has previous form for producing ambitious and eye-catching building designs.

The building would reach a total height of 500 m (1,640 ft) – which is almost as tall as the tallest building in the US – and would have a width of just 200 m (656 ft). Perhaps it’s best to think of it less like a standard skyscraper and more like an even bigger take on Google’s landscraper idea – that is, a tower turned on its side. It would sport a mirrored finish, which seems a strange choice in the hot desert sun, but the idea behind it is that it’s meant to somehow help this behemoth blend in with its surroundings, though perhaps that’s a lost cause. Its huge interior layout, meanwhile, would stack parks, schools and homes atop each other.