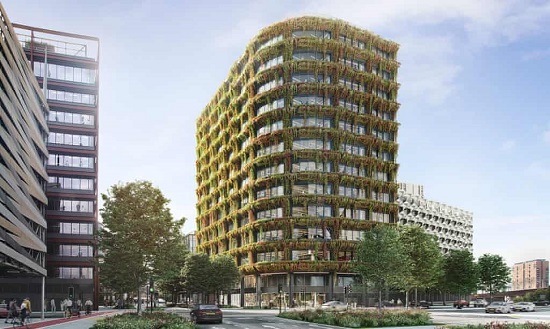 Hanging plants smother the walls of a new office block proposed for Salford, giving it the look of something from an abandoned post-Covid city, reclaimed by nature. The ivy-covered tower, designed by Make Architects, has been trumpeted as “fossil-fuel free”, set to run on 100% renewable energy and reach net zero operational carbon, with tenants enjoying the “biophilic” benefits of dangling foliage. But not everyone is convinced.

“It’s strange to see something described as ‘fossil-fuel free’ when it is made of concrete, steel and glass,” says Joe Giddings, coordinator of the Architects Climate Action Network (Acan) campaign group. “The production of these materials entails burning a huge amount of fossil fuel.

“The climate emergency is not a game and we can’t just spin our way through it. We need to think about where our materials come from, how they’re made and interrogate the whole supply chain – from construction to demolition and reuse.”
In the race to reach net zero carbon by 2050, a commitment to which the UK is legally bound, Acan sees the biggest unchallenged obstacle as the energy consumed by construction. Much is made of the proposed energy efficiency of buildings once they are occupied, but so far very little attention has been paid to the carbon emitted in getting them built, and eventually dismantled – from extracting raw materials and manufacturing components, to the toxic byproducts of demolition leaking out in landfill.

Acan estimates that this “embodied carbon” accounts for up to three-quarters of a building’s total emissions over its lifespan, a proportion that is only going to grow as the energy grid becomes increasingly decarbonised with the rise of renewables. With the built environment contributing about 45% of the total carbon emitted in the UK, the embodied energy of construction has become the vital element to focus on.