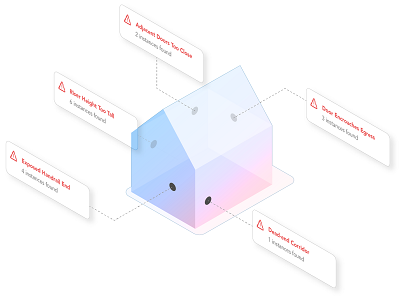 Technology: UpCodes AI is “the spellcheck for buildings”

For many architects, the hardest part of their job starts after they finish designing a building, when the onerous process of code compliance begins. Written to ensure the safety and accessibility of buildings, codes dictate everything from the height and depth of stairs and where railings end, to the amount of floor space in front of toilets and the height of windows. Regulations are constantly updated, which means that even the most diligent team of architects often miss violations, resulting in costly delays. Y Combinator alum UpCodes wants to help them by using artificial intelligence, including natural language processing, to create what the San Francisco-based startup describes as “the spellcheck for buildings.”

Called UpCodes AI, the program is a plug-in that scans 3D models created with building information modeling (BIM) data and alerts architects about potential issues. It draws on the same backend as UpCodes’ first product, an app that compiles regulations into a constantly updated, searchable database with collaboration tools. UpCodes  AI, which launched to the public last week, currently supports recent versions of Autodesk Revit and will add ARCHICAD, Sketchup and IFC in the future.

“This is like Grammarly for the construction industry. By highlighting code errors in real-time, the software acts as a code consultant working beside you at all times,” UpCodes co-founder and CEO Scott Reynolds tells TechCrunch.

UpCodes was founded in 2016 after Reynolds became so frustrated by traditional code compliance while working as an architect that he switched career paths and launched the startup with his brother Garrett, a former software engineer at PlanGrid, to fix the process.

Building codes change so often that they are sometimes referred to as “living documents.” UpCodes’ database draws directly on regulations put online by municipalities and is updated almost in real-time. This eases a major pain point because many architects who thought they had followed regulations find out too late that they missed an amendment. In worst case scenarios, completed work needs to be torn out and rebuilt, potentially costing tens of thousands of dollars. This is a frequent occurrence and Scott Reynolds points to studies by McKinsey and the National Association of Home Builders that cite the complexity of code compliance as a major reason for reduced productivity in the construction industry and rising home prices.