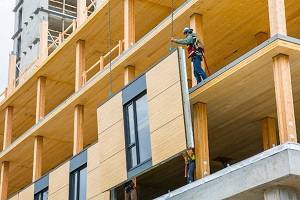 As reported in Kelowna Capital News, taller timber towers could be making their way towards Kelowna.

Kelowna city council decided on Monday to send an expression of interest to become part of the province’s early adoption initiative to build encapsulated mass timber buildings from seven to 12 storeys in Kelowna.

The provincial government announced in March it would be proactively adopting building code changes that allow for the safe construction of taller wood buildings, which are currently allowed only up to six storeys high.

With both provincial and national codes set to change in the next few years, Kelowna is hopping on the encapsulated mass timber train a few years early.

“We’re excited to see Kelowna leading innovations in the construction industry,” development services director Mo Bayat said. “Because many of the components are pre-assembled in mass timber it translates to a much faster build with less disruption to the neighbourhood.”

Mass timber buildings can be around one-fifth the weight of comparable concrete buildings, while still meeting safety standards, structural resilience and fire protection. The buildings also encourage innovation through value-added wood products, helping to grow local and global markets, while promoting climate-friendly construction and supporting B.C.’s forest-dependent communities. Cost savings, as well as ease and quality of assembly, are other significant benefits.