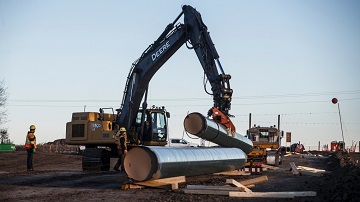 Days after shovels hit the ground in Alberta on the Trans Mountain pipeline expansion, a new survey suggests the majority of Canadians support the construction of new pipelines.

The survey, commissioned by CTV News and conducted by Nanos Research, polled 1,010 Canadians and found that 42 per cent supported new pipelines while another 23 per cent somewhat supported them.

Just under a third, or 30 per cent, oppose or somewhat oppose pipeline construction. Four per cent of respondents said they were unsure.

For those aged 55 and older, 70 per cent said they support or somewhat support the proposition.

In 2018, the federal government stepped in to buy the Trans Mountain pipeline between Alberta and the British Columbia coast from Kinder Morgan Canada for $4.5 billion. The company and its investors got cold feet about proceeding as political opposition to the pipeline threatened unending delays.

Work to expand the pipeline began this week, with a pledge from the president and chief executive of Trans Mountain, Ian Anderson, telling reporters that the pipe will “be in the ground before Christmas.”

Alberta Premier Jason Kenney and Prime Minister Justin Trudeau will hold their first face-to-face meeting since the federal election next week, and pipelines are expected to be high on the agenda.