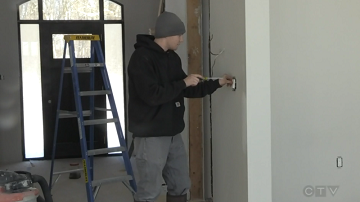 The ongoing shortage of skilled trades workers across the county continues to have an effect on a number of major construction projects.

The Orillia recreation centre is just one example. Its completion date was pushed back because of a lack of qualified people to hire.

The province says the trades industry is short almost 250,000 workers. Now the push is on to get more young people to consider a blue-collar job, with great pay and job security.

Twenty-two-year-old Cameron Strachan is in his fourth and final year as an electrical apprentice. He says “the opportunity just popped up for him. I didn’t even really know what went into it. I just saw the opportunity and went for it,” he adds from his worksite in Oro-Medonte.

Orillia Secondary School has 200 students in its co-op program this year. School staff say more students than ever are considering trades as a job.

“We have noticed it over the last couple of years, mainly because we’re promoting the Ontario Youth Apprenticeship program with grade 10 students when they are in their career course,” explains OSS co-op teacher, Mary Ellen Deneau.

Local MPP Jill Dunlop says it’s estimated one in five new jobs in Ontario over the next five years will be in the trades.

Eighteen-year-old Brett Provenzano agreed to apprentice with Brennan’s Inc. in Orillia for 9,000 hours as part of his schooling. He signed a contract with the company this week and says he’ll be getting paid the entire time. “I love the hands-on work.”

With one in three tradespeople over the age of 55, the province expects the demand for new workers to only increase in the coming years.

And the frustration is being felt from coast to coast.