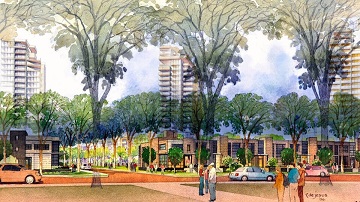 As reported on CTV News, developers may be heading back to the drawing board after asking for a $13-million tax break to redevelop the Strathearn Heights neighbourhood, located near a future LRT station.

Strathearn Heights Ltd. was asking for the city’s help in adding nearly 2,000 units–a mix of towers and townhouses–to the 25-acre property. Right now, there are 50 walk-up apartment buildings containing 500 units on the land.

But owners say the roughly $1-billion project was made even more expensive when they were asked to build a road, 88 Street, that would end up belonging to the city.

“It was a request of the administration and of the city, but it was a request of our land,” said David Kent of Nearctic Property Group, one of two developers involved in the project. “So we would like to be reimbursed for that land over a period of time with the uplift from the taxes that we’re going to create.”

Developers came to councillors hoping to get the $13-million tax break to help build the street, but on Thursday, a committee delayed its decision until fall budget talks.

The committee also asked city staff to restart the process of gathering feedback from the community about another possible change to the project.

Some councillors say they’re worried that lending money to a private developer would set a precedent, and others say they’ve already made a sizeable investment in the development in the Valley Line LRT station, which is expected to open by December 2020.