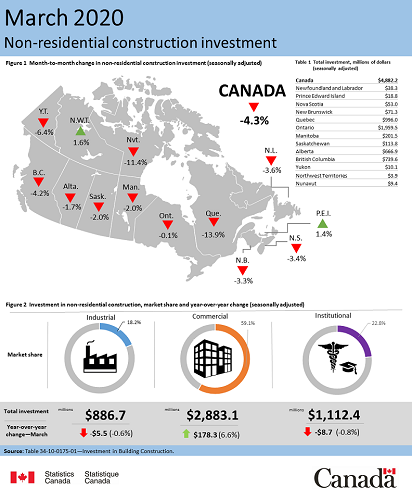 Statistics Canada reports that total investment in building construction decreased 3.6% to $15.4 billion in March, with declines in both residential (-3.3% to $10.5 billion) and non-residential (-4.3% to $4.9 billion) investment. Construction in March was negatively affected by COVID-19 restrictions, especially in Quebec which shut down all non-essential building construction on March 25. National declines coincided with a drop in construction hours worked in March, as reported by Statistics Canada’s Survey of Employment, Payrolls and Hours.

On a quarterly basis, total investment edged up 1.0% in the first quarter compared with the fourth quarter of 2019.

Quebec (-18.7% to $2.0 billion) and British Columbia (-2.9% to $1.9 billion) contributed to the majority of declines in residential construction investment in March, outweighing gains in six other provinces. Quebec reported its largest decrease since the beginning of the current series in 2010, down $462.9 million for the month.

The overall decline in residential investment in March was driven by the multi-unit dwellings component, which fell 6.9% to $5.2 billion. Six provinces posted declines, with the largest decrease in Quebec (-23.3% to $1.1 billion).

All three components of non-residential investment decreased in March, leading to the first overall decline (-4.3% to $4.9 billion) since November 2018. Prince Edward Island was the only province to report growth in non-residential investment for the month, up 1.4% to $18.8 million. The increase was driven, in part, by the expansion of BioVectra’s manufacturing facility in Charlottetown.

The commercial component posted the largest declines in non-residential investment, decreasing 4.2% to $2.9 billion. Quebec (-14.1%) and British Columbia (-4.6%) reported the majority of the declines in March, while Ontario was the only province to post an increase, edging up 0.3% to $1.1 billion.

The industrial component decreased 5.0% to $886.7 million in March, with declines in eight provinces.

In the first quarter, total investment in building construction increased 1.0% (+$445.8 million) compared with the fourth quarter of 2019. Ontario (+2.0%) led the provinces in investment growth for the quarter. A strong January and February led Quebec to the second-largest quarterly growth in investment (+3.4%), despite reporting a sharp decline in March. In contrast, Manitoba (-$90.7 million) and British Columbia (-$77.5 million) reported the most significant declines for the quarter.