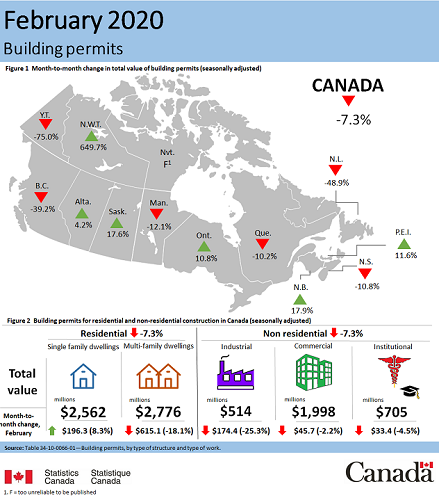 Statistics Canada reports that the total value of building permits issued by Canadian municipalities decreased 7.3% to $8.6 billion in February, driven by the residential component. Declines were reported in five provinces, with the largest decrease reported in British Columbia (-39.2% to $1.3 billion). Meanwhile, Alberta reported the fourth consecutive monthly growth, up 4.2% to $1.1 billion.

In the context of the rapidly-evolving situation around the novel coronavirus (also known as COVID-19), Statistics Canada remains committed to providing timely information to all Canadians. As such, the agency has released March 2020 preliminary flash estimates of building permits for select regions.

The total value of permits for single-family dwellings increased 8.3% to $2.6 billion. These gains were driven by housing developments in Ontario (+$205 million), bringing the value of permits in the province to its highest level since December 2017.

Value of industrial permits down

In February, the value of non-residential permits was down 7.3% to $3.2 billion. This decrease was largely due to declines in the value of industrial permits (-25.3% to $514 million), mainly in the province of Quebec.

The value of institutional permits declined 4.5% to $705 million. This was largely due to decreases in Alberta (-$74 million) and British Columbia (-$62 million), following strong gains in those provinces in January.

Total value of commercial permits was down 2.2% to $2.0 billion, with declines reported in six provinces.