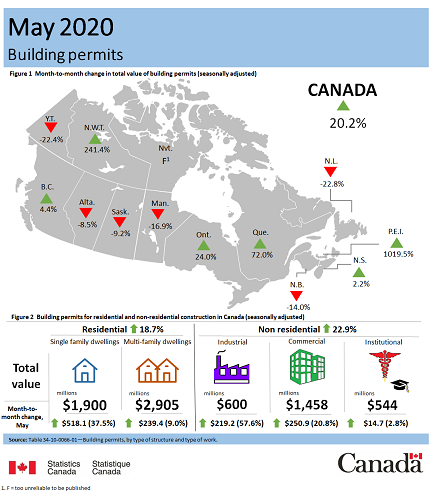 Statistics Canada – Building permits bounce back in May

The total value of building permits issued by Canadian municipalities in May bounced back 20.2% to $7.4 billion, following declines of 13.4% in March and 15.4% in April. This was the largest percentage increase since March 2009, and it coincided with the relaxing of COVID-19 construction restrictions in Ontario, Quebec and Prince Edward Island. The May level is still 20.4% below the last peak observed in January 2020.

Although all provinces still had public health guidelines in place in May, Ontario, Quebec and Prince Edward Island had the most impactful policy changes during the month. In Ontario, some non-residential construction projects were reopened starting May 4. Additionally, the province moved into Stage 1 of reopening on May 19, which included a full resumption of all construction projects.

In Quebec, all sectors of the construction industry in all regions were authorized to resume activity on May 11 under strict guidelines of the Commission des normes, de l’équité, de la santé et de la sécurité du travail. Lastly, in Prince Edward Island, new construction projects were permitted to start on May 1, following a five-week work stoppage.

The total value of residential permits was up in six provinces in May, increasing 18.7% to $4.8 billion nationally. The largest increase was in Quebec, up 53.4% for the month. On April 20, Quebec reopened residential construction to be delivered by July 31; the remainder of the construction sector was reopened on May 11.

The vast majority of residential gains were attributable to increases in the value of permits for single-family homes, which rose by a record $518 million (+37.5%), following a drop of 34.6% in April. Seven provinces reported gains, led by Ontario and Quebec.

The value of permits for multi-family dwellings increased 9.0% to $2.9 billion, driven by projects in the Montréal and Vancouver census metropolitan areas.

Industrial permits jumped 57.6% to $600 million, following a substantial decrease in April. This increase was largely driven by a permit for a Molson brewery in the CMA of Montréal.