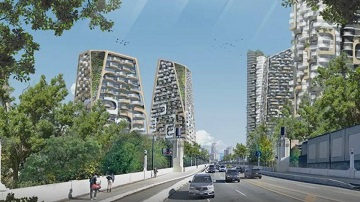 A proposed new housing development on Squamish Nation land has doubled in scope, with plans for up to 11 towers on the slice of land next to False Creek.

The Squamish first proposed the development in April, with plans for about 3,000 units — most of them rental. That proposal has now expanded to include an estimated 6,000 units, of which 80-90 per cent would be rental.

Most of the units would be market-priced, but the plan calls for efforts to find partnerships to subsidize some social housing. It would also have parking spots for just 10 per cent of residents.

Squamish Councillor and spokesperson Khelsilem said the earlier, 3,000-unit projection was based on preliminary assumptions about the project.

“We hadn’t really looked at what type of typology and urban design would we want to propose for the site,” he said.

“So when we really started to dig down, we saw that there was the potential for more units. But the other part of it is we see there’s a housing crisis going on in Vancouver and building a lot more rental seems like an important thing to do.”

Khelsilem added that because the land is collectively owned by the Squamish people, the development needs to maximize revenues to benefit the entire nation.

The development would be sited on land adjacent to Vanier Park, straddling both sides of the Burrard Bridge.

Squamish land in the area, known as Senakw, once included Vanier Park as well as the Seaforth armoury, but was whittled down over years of expropriation and buyouts, eventually forcing the nation’s members to the North Shore.