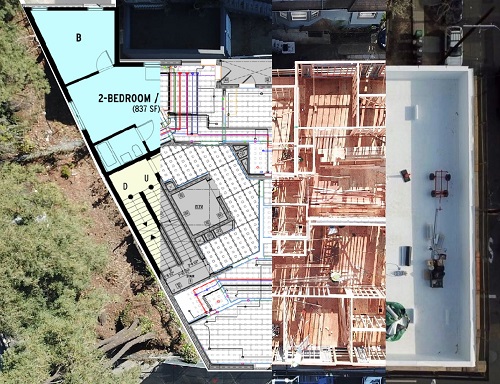 Construction is one of the largest industries still resisting the call of the 21st century, its practitioners opting for decades-old but tried and true methods. Ben Huh, of Cheezburger fame, aims to modernize the planning and assembly of buildings with software-generated floor plans and rooms that fit together like Lego bricks.

Huh’s new company, Social Construct, handles everything from design to execution, leaving only the actual in-person work to construction contractors. By optimizing layouts, laying cables and pipes below floors instead of in walls, and standardizing both pieces and assembly, this new tech-informed method could reduce the time and cost of constructing a building by 20 to 30%.

The company emerged in 2017 out of a project at Y Combinator, where Huh worked after leaving web culture trailblazer Cheezburger. While researching the economics of construction, he was surprised at both the scale and dated nature of the industry.

Compared with the cost of manufacturing electronics or launching other large, multi-million-dollar endeavors, which have dropped precipitously, the costs and time frames of construction have either remained fixed or increased for decades.

“There have been productivity increases everywhere, but not in construction. It peaks in the ’70s, then drops,” he explained, illustrating the problem as follows: “Imagine you have a 55-inch hole in your wall — it’s cheaper today to buy a TV to cover the hole than to get it fixed.”

It turns out that construction, although a huge industry, is a very fragmented one — and, understandably, rather risk-averse. Even if someone wanted to question the doctrines and practices by which buildings are made, they don’t command the capital to do so.