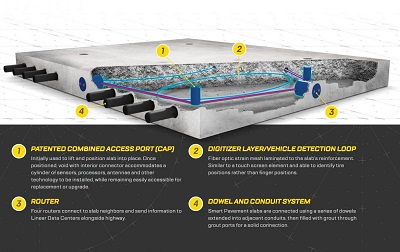 Smart roads could soon connect you to the internet

Self-driving cars have captured the limelight when it comes to how you’ll get around in the future, but one Kansas City technology start-up is looking at the road itself.

Integrated Roadways is developing “smart pavement” technology that would not only help increase roadway safety but could also serve as the platform for Wi-Fi for cars and other future mobility services.

“Smart pavement is a factory-produced pavement system that transforms the road into a sensor, data and connectivity network for next-generation vehicles,” said Tim Sylvester, founder, chief executive and president of Integrated Roadways.

The road system uses high resolution fiber optic sensors and other technologies inside the pavement to detect vehicle position in real time as well as roadway conditions. This technology would detect crashes as they occur, for instance, and automatically notify emergency responders to those crashes.

Integrated Roadway’s smart pavement is about to be put to the test. The company announced this spring that the Colorado Department of Transportation has awarded a $2.75 million contract for a five-year smart pavement project on U.S. 285 near Fairplay, Colo., south of Breckenridge.

The company, along with partners Kiewit Infrastructure Co., Cisco Systems, WSP Global and Wichita Concrete Pipe, will build about a half-mile of smart pavement on the highway to collect data on run-off-the-road crashes as well as automatically alert authorities of the crashes.

“It is such a beautiful location that people get caught up in the view and they miss the turn,” Sylvester said. “So they go off the edge of the road in a rural area and somebody might not have seen them.”

When Sylvester approached Colorado transportation officials about the concept of intelligent infrastructure and the myriad of things it could do, they were intrigued.

While it’s never been deployed before and is still very conceptual, the state was interested in fostering the idea and seeing its value, said Peter Kozinski, director of the RoadX program Colorado Department of Transportation.

“The pavement would be able to act like the tracking pad on your mouse, knowing the speed and direction that a vehicle travels across it is going,” he said. “If a vehicle leaves the pavement at a trajectory and speed that suggests they left unsafely, the pavement would notify emergency responders that someone had ran off the road.”

This way dispatchers could send someone to the scene to see if anyone needed help, instead of waiting for a passerby to recognize that someone had gone off the road.

“We believe that Integrated Roadways has an interesting concept that we want to see how well it works,” Kozinski said.

In addition to alerting authorities to run-off-the-road crashes, intelligent infrastructure can help improve road safety by providing data from before and after a crash to highway officials so they can design changes to prevent similar crashes in the future.