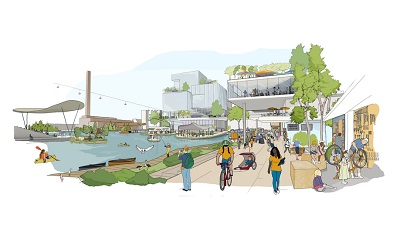 A high-tech neighbourhood designed by Google’s sibling company has been pegged as a way for Toronto to become a hub in the burgeoning field of urban innovation.

“From a very practical perspective on an economic development basis, the smart cities or urban innovation area is a booming area that some would say is a $25 trillion dollar opportunity worldwide,” said Kristina Verner, vice president of innovation, sustainability and prosperity at Waterfront Toronto.

“Canada is really poised to be the beneficiary of … this project to actually be that cluster’s home. And the job creation that will come from that, the secondary job growth, could be immense.”

In Sidewalk Labs’ — Google’s sibling company charged with developing Quayside — outline of their vision for the project, they write that just like Silicon Valley is the heart of digital technologies and New York is the center of finance, “the Eastern Waterfront can help make Toronto the global hub for urban innovation.”

“We see an extraordinary foundation of talent and innovation and support from all three levels of government and the citizenry for a thriving technology sector already here in Toronto,” said Micah Lasher, head of policy and communications at Sidewalk Labs.

Sidewalk Labs, he said, “can add to that already outstanding success” by making Toronto the epicenter of urban innovation and technologies that will improve urban life.

Improving the quality of urban life for people living in the city is one of the main cruxes of the project.

“What we are trying to do is something that has never been done anywhere, which is really think about the urban environment and how one can take everything we know today about the best principles of urban design and combine it with emerging technology to fundamentally improve quality of life in an urban context,” Lasher said.

From convertible buildings to self-driving transit to paths that melt snow, Sidewalk Toronto pegs the high-tech infrastructure as a way to solve urban problems cities face.

Sidewalk Labs calls the property a global test bed, built from the internet up.

But it will also be a home, a neighbourhood; with proposed modular housing and bike paths and environmentally-friendly building standards.