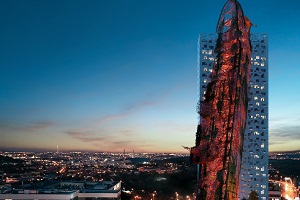 Shipwrecked skyscraper concept would wash up in Prague

As blogged on New Atlas, even its critics – and there are sure to be many – couldn’t exactly accuse the Top Tower of being another boring glass rectangle. Planned to rise to a height of 135 m (443 ft) in Prague, the Czech Republic, this remarkable-looking skyscraper would feature a massive ship sculpture that looks like it has been shipwrecked there after some kind of apocalyptic flooding event.

Top Tower was designed by Czech firm Black n´ Arch, with artist David Černý responsible for the massive shipwreck sculpture. The idea behind its unusual design is to highlight the potentially catastrophic effects of climate change and rising sea levels.

The massive amounts of energy and CO2 that are expended when constructing tall towers undermines this aim, though developer Trigema does say it would be rated LEED Gold (a green building standard). We’ve no information on what kind of sustainable technology would be used.

The building would feature offices, a cultural center, and retail and commercial areas on the lower floor. Upper floors would be given over to residential units and there would also be a roof garden and a viewing point at the top of the actual shipwreck structure itself. This would need to be accessed by a ski lift according to the press release, so wouldn’t suit the faint of heart.