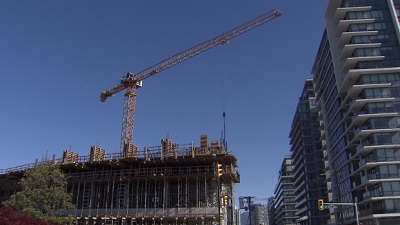 As reported on CTV News, a deadly crane collapse in Seattle over the weekend is highlighting the risk hundreds of cranes dotted around the Lower Mainland pose.

Four people died Saturday after a crane working on a building in Seattle’s downtown core toppled. Authorities are working to determine if strong winds played a role in the collapse or if there was an issue with the crane itself.

“You can’t look at the skyline without seeing a number of tower cranes dotting the sky,” said Al Johnson, the vice-president of prevention services for WorkSafe BC.

WorkSafe formed a provincial crane inspection team in 2008 with a focus on making cranes a safe work environment and conducts annual inspections.

That same year, a 22-year-old crane operator was killed while working on the Canada Line.

In 2012 a construction crane collapsed on the Port Mann bridge but fortunately no one was hurt.

The number of cranes has risen alongside Metro Vancouver’s booming real estate industry.

“There’s multiple cranes on smaller footprints,” Johnson says. “So on one site today, you’ll have a number of tower cranes, whereas years ago there was one crane per site.”

Crane operators in B.C. must be certified, but a union notes that there’s no certification for workers who disassemble the cranes.