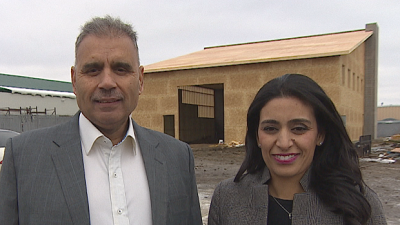 Moni Minhas is currently working to build the biggest distillery in the history of Saskatchewan.

By the end of February, he said he’ll have products on the shelf that were made in the province.

The facility will offer tastings, tours, off-sale liquor sales and a gift shop.

“This will be one of the biggest tourist attractions in southern Saskatchewan,” said Minhas. “I’m 100 per cent certain of it.”

According to Minhas, the business will create 20 jobs for food scientists, mechanics, distillers and others in the region. All the architects, engineers, contractors and suppliers behind the construction of the facility are also Regina based.

Once up and running, Minhas said he plans to use as many Saskatchewan-made ingredients as possible. The products will then be exported to other provinces and countries.

“I’m very close to closing a deal with somebody in California to buy the product that is made in this distillery,” Minhas said.

Minhas said he’s always had a love affair with Saskatchewan. The Alberta mogul said his cousin even played for the Roughriders decades ago.

“We’ve been coming to Saskatchewan forever. I thought it was about time that we gave something back to this province,” he said.

Minhas owned liquor stores in Calgary 25 years ago and has long held a patent on vodka.

A former petroleum engineer and creator of two publicly owned oil and gas companies, Minhas came out of retirement to build the distillery.

It’s not the well-deserved break his family thought he might take.