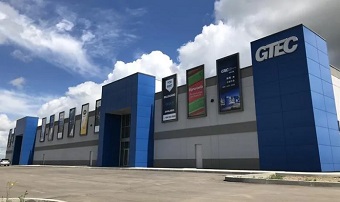 After almost four years of close, enthusiastic cooperation with the developer of a wholesale mall at the Global Transportation Hub, the government of Saskatchewan has announced a major reversal.

It says it will no longer support immigration applications tied to the Global Trade and Exhibition Centre (GTEC) – a wholesale mall built and promoted by Brightenview International.

The government made the decision on Nov. 6, just two days after CBC interviewed a senior immigration official. In that interview, CBC explained the results of its investigation into GTEC and the concerns it uncovered.

Since the project was announced in 2016, Brightenview and its agents have told Chinese nationals that purchasing a showroom unit in GTEC could qualify them for Canadian permanent residency under the entrepreneurial category of the Saskatchewan Immigrant Nominee Program (SINP).

“Future applications from applicants who are proposing to establish a business out at GTEC would no longer be eligible,” said the assistant deputy minister responsible for immigration, Christa Ross.

In an interview with CBC on Friday, she said the government now believes GTEC’s business model is too risky for foreign nationals.