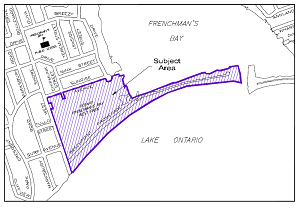 Carol McGuffie has lived in the Rotary Frenchman’s Bay West Park area for more than 30 years, but she fears her neighbourhood will never look as it used to again.

She is one of many Pickering residents expressing concern as the city removes dozens of trees ahead of phase one of its master plan. “What’s our future for this beautiful jewel of the West Shore area?” asks McGuffie.

Stumps and sawdust have replaced the trees that once lined Beachpoint Promenade, which fellow resident Craig Bamford says has attracted people from across the Greater Toronto Area. The city has posted signs that warn residents of the upcoming changes as part of the master plan, but Bamford says he felt unprepared for the number of trees that have been chopped down. “I am devastated by the extent of the clear-cutting which has occurred here,” he said.

Heather Jakobsen, who also lives near the park, had taken up photography to snap some photos of the wildlife the trees attracted, such as racoons and scarlet tanagers. With the city removing most of the trees in the area, she fears the animals may no longer pay a visit to the park.

“There are going to be lots of birds coming in for a place to stop over before they go north,” she said. “It’s not going to be here.”

Phase one of the plan, which is set to include a picnic area and parallel parking, saw the removal of trees to make way for the changes, but Pickering Coun. Maurice Brenner says many of the trees needed to be removed regardless of the plan. He says he too, has noticed a huge change in the face of the area.