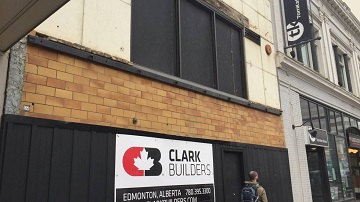 It’s been boarded up for more than a decade. The last business licence issued for it was in the late 1990s.

But now the small commercial building at 10344 Jasper Ave. — just east of the historic Birks Building — is getting ready for a transformation.

About two weeks ago, a sign for Clark Builders went up outside the space Edmonton realtor Oliver O’Connor purchased in 1997 for $170,000.

Now O’Connor plans to build a 10-storey, 34-unit residential building with the main floor and basement reserved for restaurants or other commercial development.

Clark Builders has been hired as construction manager and local architectural design firm Holo-Blok will design the project.

O’Connor said it will be the first building of its kind in the city.

“We’re bringing in something that would be in Vancouver or New York … or Paris,” he said, “a smaller building that’s being developed into something larger.”

Holo-Blok architect Roddy Handa is short on details about what the space will look like but said there’s a hint in what they’ve named the project: The Wedge.

“We’re almost trying to wedge in a new kind of architectural vernacular that’s unique to the city, respectful of the climate that we’re in but also is cognisant of the historical area that we’re in,” Handa said.

The residential units could be apartments, condominiums or executive short-term leases, he said.