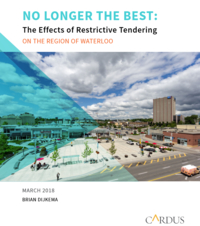 As reported on CBC News, a new study finds the Region of Waterloo’s process to accept bids for construction projects “unfair, uneconomic and uncompetitive.”

The report, released Thursday morning, is called No Longer the Best: The Effects of Restrictive Tendering on the Region of Waterloo and was released by Cardus, a public policy think tank dedicated to the renewal of North American architecture.

Researchers looked at $351.3 million worth of regional construction contacts between 2009 and 2017, and found a decision by the region in July 2014 to restrict construction bids to just firms affiliated with the Carpenters’ Union “had several negative effects.”

The study found almost 84 per cent of construction firms were shut out of contract work, which in turn caused the average number of bidders to be cut in half, and contract prices went up.