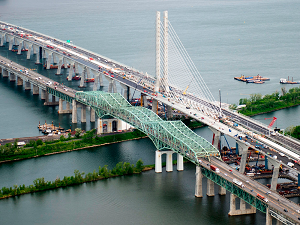 A light-rail line planned for the new Samuel De Champlain bridge in Montreal runs the risk of corroding the $4.5 billion structure, a risk authorities say they’re taking all the necessary measures to avoid.

The eight-lane bridge opened in July of this year, replacing the older Champlain Bridge that was compromised by the overuse of road salt and had to be replaced before it failed.

The proposed LRT line will run in the centre of the new span with a 1500-volt direct current power supply through overhead wires, but there is a risk that could lead to the electricity leaching into the surrounding bridge structure and causing corrosion over time.

“A DC power distribution system for transit applications is subject to stray currents leaking into the underlying infrastructure and may cause premature corrosion,” said a report on the issue that was sent to the project’s chief engineer and included in an access to information request.

The report goes on to say that the risks can be mitigated with special railway ties, sensors to detect any stray current and regular maintenance to ensure the track stays clean.

Lama Khodr, a spokesperson for Infrastructure Canada, said they have worked closely with the bridge builder Signature on the Saint-Lawrence and the builders of the transit network, the Réseau express métropolitain (REM) to ensure the corrosion doesn’t happen.

“Infrastructure Canada and Signature on the Saint-Lawrence (SSL) worked closely with the engineering team for the REM project to ensure that the light rail transit system to be integrated into the central corridor of the bridge will not pose any harm to the structure of the bridge which has been built to last 125 years,” she said in an email to the National Post.