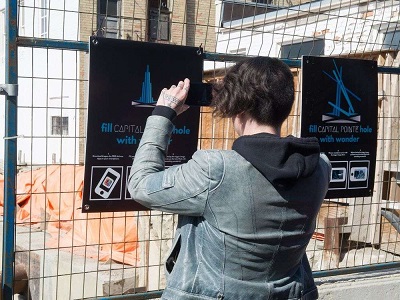 As reported in the Regina Leader-Post, with Westgate Property’s deadline to fill the Capital Pointe hole looming, some Reginans gathered at the site for a humorous event Saturday to bid the hole a fond farewell.

The afternoon event — titled “That time when we all said kthxbye to the Capital Pointe Hole” — attracted around 50 people and featured a performance by the newly formed band Abrupt Dystopia of their original (and event-appropriate) song Capital Hole.

“Holy disaster, so much disappointment. I lost my soul in the Capital Pointe hole,” went the chorus, with the audience chiming in between laughs.

Local artist Eric Hill also contributed a bit of whimsy to the event through augmented reality. Together with artist Sandee Moore, they created the project “Fill Capital Pointe Hole with Wonder.”

With the Artivive app, people held their smartphones over the pictures on four different posters, which were hung up near the hole, to see a fanciful idea of how the hole could be filled come to life on their screens.

“We were joking about stuff that could go in the hole and then we were like, ‘Oh, we’ll just try making some animations’ and then this event was made shortly after we started working on this,” said Hill.

“What kind of silly weird things could citizens of Regina fill the hole with?”

Those silly weird things include turning the hole into a giant ball pit, filling it with gelatin to create a giant jelly dessert or converting the hole into an orchestra pit — all of which are depicted through their augmented reality creations.