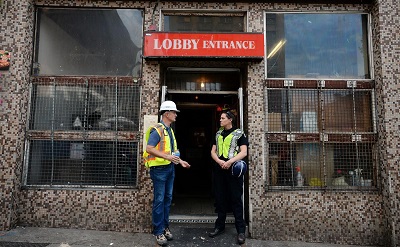 Regent Hotel in Vancouver ordered to close, city may buy or expropriate building

A year after shutting down the Balmoral Hotel because the building had been so badly water-damaged that some floors were spongy and at risk of collapse, similar problems have led the city to shut down the Regent Hotel across the street, according to city staff.

Atira Women’s Resource Society has been managing the hotel for the past three months. Janice Abbott, CEO of the non-profit, said there’s extensive mould and rot throughout the building, most of the bathrooms don’t work and some floors have had to be closed off because they are rotten.

About 50 tenants have already moved to other buildings and 80 more will move into the Jubilee Rooms, a recently-renovated single-room occupancy building a block away from the Regent that the province recently purchased for $12 million.

All tenants must be out of the Regent by June 28.

Mayor Gregor Robertson said the city would try to purchase the Regent from the Sahotas. If that doesn’t work, the city will move to expropriate the building, a tactic it has never tried before.

The city has long considered the two buildings to be the worst single-room occupancy (SRO) hotels in Vancouver. The Regent has more 1,000 outstanding bylaw violations from the city, 445 of which have been sent to the courts for prosecution.

StarMetro called the Sahotas at their home telephone number in Vancouver’s Shaughnessy neighbourhood, but was not able to reach them.

In a news conference Wednesday at the Jubilee Rooms, Robertson and Selina Robinson, B.C.’s minister responsible for housing, spoke about the city and province’s strong partnership and new provincial investments in social housing that made tenant relocation — and the building closure — possible.