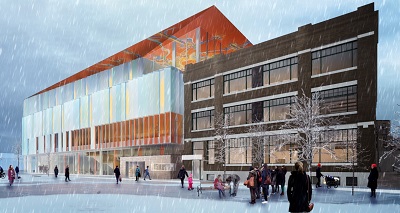 Red River College has put the brakes on a $95.4-million expansion project at its campus in Winnipeg’s Exchange District.

“RRC’s decision to halt construction of the four-storey, 100,000-square-foot Innovation Centre is the result of a disagreement with the federal government over what constitutes a reasonable timeline for completion of the major infrastructure project involving a heritage building in downtown Winnipeg,” said college spokesman Conor Lloyd.

To keep the federal contribution of $40.6 million, the project slated to be built on Elgin Avenue would have to be completed by Nov. 30. The funding agreement was signed and finalized at the end of June 2017, he said.

Meeting that deadline is impossible because the project involves the renovation of a heritage building, which requires complex and time-consuming work, Lloyd said, adding that RRC has been working to get a deadline extension but the government has been unwilling to grant it.

As a result, the companies working on six tenders for the project have been told to discontinue, at least for the time being.