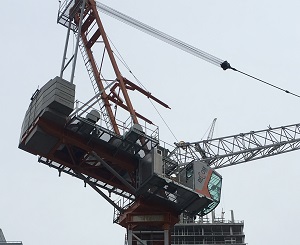 The Moritsch name has long earned a reputation for top-quality products in leading construction sites across the world thanks to the over 50 years of crane design and manufacturing experience by the late Ferruccio Moritsch, creator and founder of Comedil. His cranes have been a fixture in leading job sites in Canada ever since Enrico Redigonda, President of Concrane Sales, sold the first Comedil cranes in Ontario back in 1988. Since then, Redigonda’s relationship with the Moritsch family has continued, as was announced last year with the exclusive dealership agreement between Concrane Sales and Recom Moritsch—the Moritsch family’s new, or reborn, crane manufacturing company.

“Canada needed a crane that could withstand our harsh weather conditions and demanding work schedules,” Redigonda explained. “For over a year, my grandson and I worked with the Moritsch family to help create a crane for the future of the Canadian construction industry by making improvements to issues we’ve encountered with other cranes in the market.” Redigonda continued, “Along with countless upgrades to improve safety and efficiency, a beautiful, large, climate-controlled cabin was added with the crane operator’s comfort and control truly in mind.” Redigonda added, “The catwalk, ladder, platforms and railings around the counter jib have all been galvanized and the structure has also been coated with an antirust zinc base. The electrical panels are stainless steel to protect from rust and corrosion and the electrical components are all winterized to accommodate our freezing temperatures and snowy conditions.”

Recom Moritsch’s cranes first arrived in Canada last spring and have been met with consistently positive reviews on leading job sites, from forming contractors and crane operators alike. But the real challenge was going to be when the temperatures started to dip below 0 °C (32 °F), resulting in snowy and icy conditions. “That’s when the headaches usually start,” Redigonda explained. “Any moving part on a crane can be affected by the freezing temperatures. The hydraulic system, motor, hoists, even the electrical panel.” Redigonda continued, “There are steps you can take to help avoid any major damage to the crane, such as letting it warm up before operating and going slowly. But some machines are just no match for Mother Nature.”

“This winter has been a particularly harsh one in the GTA,” explained Redigonda’s grandson Daniel Wright of Concrane Sales. “We had quite a few snowy days and days with frigidly cold temperatures that really took a toll on some of the equipment. When the machines aren’t working, the job isn’t progressing and that makes no one happy. Downtime costs money and there is absolutely no time for delays in this industry.” Wright continued, “There were many days this winter when we had multiple calls from customers whose cranes were down or required service. We never received any calls or complaints regarding the Recom cranes though.”

Hardrock Group were one of the first in Canada to purchase a Recom crane in 2017 and have since added more Recom luffers to their fleet. A crane operator from Hardrock Group, who operated a Recom RTL265 luffer on a Toronto jobsite, said no special maintenance was needed on the crane for the winter. He explained insulators were brought in for the oil tanks, as that’s one precaution they usually take with their cranes, but they didn’t end up being used on the Recom as they were not needed. This is due to the Recom cranes coming equipped with a built-in heater to keep the oil from thickening, which can make it difficult for the oil to flow and lubricate, resulting in an increased risk of damage to mechanical parts. The crane operator also mentioned they sometimes encounter some small electrical issues during the colder months but had no issues with the Recom crane whatsoever. This is thanks to Recom’s addition of stainless steel electrical panels and winterized electrical components.

“The Recom is like no other crane,” Hardrock Group’s crane operator exclaimed. He described the large, climate-controlled cabin as “amazing” and “really liked the size of it”. The crane controls, he added, were good—particularly the dead man’s switch, which was a welcomed feature, as well as the emergency brakes on the boom and the hoist. When asked to compare his experience with the Recom to other cranes, he explained “The swing is the best, by far. It’s much smoother and faster than other cranes.” He continued, “I’m operating another luffer now and the boom isn’t half as fast as the Recom.” He added, “I hope I get to operate it again.”

As the cranes work on the job in the downtown Toronto core was completed, it was taken down in, what a representative from Hardrock Group described as, a fraction of the time. “It only took us around six hours,” he explained. “Other cranes usually take us all day.” This is due in part to the precisely-placed pick-up points, making assembling and disassembling the crane a smoother process.

With the Recom cranes thriving during their first winter in Canada, combined with their consistently positive reviews, Redigonda is confident that these orange and grey luffers and hammerheads will increasingly become a fixture in construction sites. “The Moritsch family have really listened to what we want and need out of a crane in Canada,” explained Redigonda. “Everything, down to the familiar simplified Canadian-style internal climbing system, has been considered, studied and implemented.” And, according to Redigonda, The Moritsch’s continue to listen. “Whenever a customer has a specific need or modification, the Moritsch’s are fully prepared to work together to build a customized solution.” Redigonda concluded, “As someone who has been in the industry for 55 years and worked with as many cranes as I have, I truly believe this is the crane we need in Canada and will be the future for our industry.”

Recom Moritsch’s full range of luffing jib and low-top hammerhead cranes will be available this year—four of which are expected to arrive in the GTA by summer 2018. Recom Moritsch has also recently acquired a fellow Italian tower crane manufacturer, adding flat tops to their current offering. They are currently producing cranes from 6t to 12t and aim to have six new models available by the end of the year.