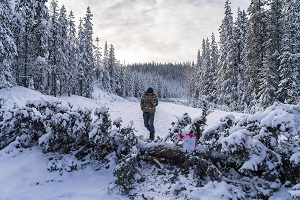 RCMP have launched a criminal investigation after safety hazards such as partly cut trees in danger of toppling and stacks of tires and accelerants were found along a remote access road that construction workers need to build a natural gas pipeline.

A group of hereditary chiefs with the Wet’suwet’en Nation has declared the Coastal GasLink project will not go ahead, and they plan to defy a court injunction ordering the removal of barriers that have been placed in the road. The company posted an injunction order online on Tuesday and a copy on Thursday was pinned to one of the barriers. The order gives the defendants 72 hours to clear the way before the company is authorized to remove obstacles along the road, but Coastal GasLink has said that doesn’t necessarily mean it will immediately begin clearing them way.

In a statement on Wednesday, RCMP said officers patrolling the logging road came across trees that were partly cut in readiness for felling, three stacks of tires covered by tarps and trees, and several jugs of accelerants, including gasoline and diesel oil.

The “concerning items” resulted in a criminal investigation, police said, adding partly cut trees along the Morice West Forest Service Road are a safety hazard because wind could cause them to fall without warning.

“While the RCMP respects the rights of individuals to peaceful, lawful and safe protest, within the terms set by the B.C. Supreme Court, our primary concerns are public and police safety,” the RCMP said, adding that police would much prefer the dispute to be resolved through dialogue.

Protesters on Wednesday put up a canvas tent in a pullout area off the road and said they planned to stay there to support the hereditary chiefs, who have served an eviction notice to Coastal GasLink.