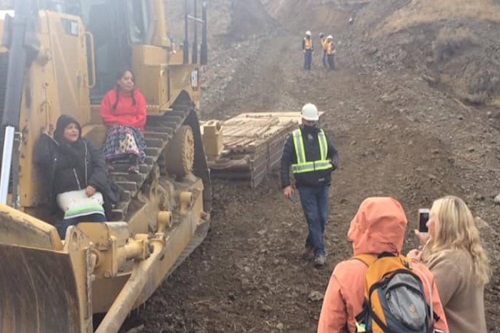 At least one person has been arrested at the Trans Mountain construction site on Mission Flats in Kamloops.

Members of the We, the Secwépemc Unity Camp to Stop the Trans Mountain Pipeline walked across Canadian Pacific Railway tracks on Thursday (Oct. 15) and onto the Trans Mountain site. There, at least one protester, a woman, sat on an excavator and called for others opposed to the pipeline expansion project to help stop the work being done.

When Trans Mountain employees told protesters they were violating a B.C. Supreme Court injunction prohibiting the obstruction of access to Trans Mountain’s worksites and that they must leave, a protester responded by saying they would stay.

Kamloops Mounties were called and, at about 2:30 p.m., the arrest — which was aired live on Facebook — took place. One of the protesters at the scene told KTW five people had been arrested, but police at the site would not confirm how many people had been taken into custody.

The arrest video is one in a series of Facebook Live videos posted to the page “We, the Secwépemc: Virtual Unity Camp.”

Protesters can be seen walking up from the beach and into the entrance of the worksite from Mission Flats Road. They can be seen and heard chanting and drumming: “No more pipelines on stolen native land” and “We will fight until we win.”

About 15 protesters can be seen at the scene in one video. At one point, an eviction notice is taped to the fence.