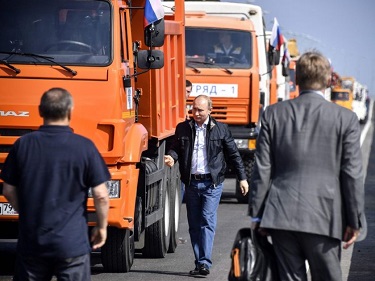 MOSCOW — President Vladimir Putin on Tuesday opened a $4 billion bridge directly linking Russia to Crimea, giving him a propaganda victory that drew condemnation from the West and served as the latest demonstration of Putin’s personalized system of power.

Putin, clad in jeans and a jacket, walked on the Russian end of the 19-kilometre long, four-lane bridge alongside the business mogul who built it — Arkady Rotenberg, the president’s former judo partner. Then Putin took to the wheels and drove over the Kerch Strait of the Black Sea in an orange Kamaz dump truck — manufactured by a state-owned company headed by Sergey Chemezov, Putin’s KGB colleague in East Germany in the 1980s. Both men are under U.S. sanctions.

Like many key moments of Putin’s presidency, it was a made-for-TV event designed to showcase his resolve and authority. State television broadcast live from a camera mounted inside the truck cab as Putin threw it into gear and made small talk with a construction worker sitting next to him. Kremlin spokesman Dmitry Peskov had earlier told journalists that Putin’s bridge project shows that “even the most ambitious plans can be realized when they are implemented by him.”

Putin annexed Crimea, a Ukrainian peninsula in the Black Sea, in 2014, after claiming that ethnic Russians in the region were threatened by Ukraine’s pro-Western revolution. Starting Wednesday morning, up to 40,000 passenger cars a day will be able to cross the bridge, drastically reducing the time it takes Russians to reach Crimea, which until now was accessible from Russia only by plane or ferry.

Ukraine and the European Union slammed the bridge opening as illegal. The bridge, constructed without Kiev’s consent, “constitutes another violation of Ukraine’s sovereignty and territorial integrity by Russia,” an E.U. spokeswoman said in a statement.

“I am confident that the aggressor will not succeed and will bear responsibility in full,” Ukrainian President Petro Poroshenko said on Facebook, referring to Russia. “The invaders will need the bridge when they have to urgently leave our Crimea.”

The West and much of the rest of the world still do not recognize the annexation as legitimate. But to many Russians, Putin’s “return” of the popular vacation destination remains his crowning achievement. In 1954, Soviet leader Nikita Khrushchev had transferred control of Crimea from Russia to Ukraine.

It also demonstrated, his supporters say, Putin’s uncompromising push to put Russian interests first and stand up to Western hegemony.