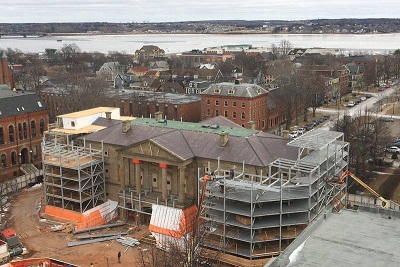 Province House restoration project in Charlottetown is on schedule

One of the most historic construction projects ever undertaken in P.E.I. is progressing on schedule.

Janette Gallant, partnering, engagement and communications officer with the P.E.I. field unit of Parks Canada, says they’re about to cross a milestone in the $47-million structural facelift of Province House in Charlottetown.

“Parks Canada is pleased to report that phase one of the Province House conservation project is coming to a close,’’ Gallant says.

Since May of 2017, extensive work has been ongoing to protect and stabilize the building.

The work has been led by the contractor for phase one of the project, Quinan Construction Ltd., in preparation for the start of the next phase.

A steel exoskeleton is being constructed to help stabilize the building and to provide a safe and efficient work platform. The perimeter fence is under construction and the foundation of the building is being excavated.

“Phase one has also involved the protection and, in some cases, the removal of the historic features found inside Province House that form part of the character-defining elements,’’ Gallant said.

These include columns, pilasters, ceiling medallions, arches, windows and the central staircase.

Gallant said each of these elements has been diligently wrapped and tagged for protection. They will be reintroduced into the building during a later phase of the project.

Quinan Construction Ltd. brought key people from Ontario and supplemented staff with local labour. The majority of the subcontractors on this project have been Island firms.