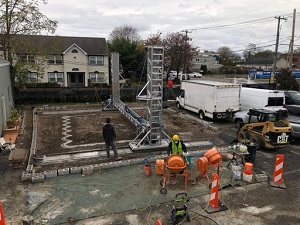 As blogged on New Atlas, the widespread adoption of 3D-printed construction seems more a case of when rather than if, and so far we’ve seen houses, a castle, and even a military barracks created using the promising tech. The latest notable development comes from S-Squared 3D Printers (SQ3D), which 3D-printed a basic prototype home in an estimated 12 hours.

The unnamed 500-sq-ft (46-sq-m) structure was built using the same method as other 3D-printed projects we’ve covered and involved a nozzle extruding a cement mixture in layers to create a house shape, though the printer itself does have some refinements over standard off-the-shelf models. Indeed, in addition to its construction work under the name SQ4D, SQ3D sells 3D printers for hobbyists, prototyping and educational uses.

“Our machine is a simple gantry style Cartesian printer, but we have patented features that separate us from the pack,” the firm told us over email. “We are using a rotating (tangential) nozzle with a rectangle output to extrude a controlled ribbon, among a few other functions that we are experimenting with.”

The project was constructed outside SQ3D’s facility in Long Island, New York, and was carried out in a few stages, rather than all at once, as the firm wanted to test its equipment and technique. Once the machinery had done its work, human laborers then finished off the roof and windows, as was the case with all the other 3D-printed houses we’ve covered.