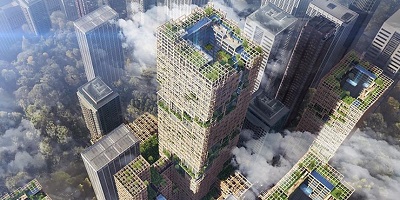 Skyscrapers made mostly of wood are rising around the world, and now plans have been announced to build what would be the world’s tallest “plyscraper” in Tokyo.

The planned 70-story, 1,148-foot tower will include residential and commercial space and is intended to spotlight environmentally friendly architectural designs and construction technologies, its developer, Sumitomo Forestry Co., announced in a written statement.

Plans for construction of the “W350 building” are underway, though the tower isn’t scheduled for completion until 2041. The total cost is estimated at 600 billion yen ($5.6 billion).

The high-rise would dwarf the University of British Columbia’s 174-foot, 18-story Brock Commons building in Vancouver, Canada, which is currently the world’s tallest wooden building.

Drawings of the new tower — a 90-percent wooden building with vibration-damping steel braces — show a boxy structure whose gridlike façades are studded with balconies and festooned with greenery. The building’s wood-lined atrium will enclose a large pool filled with reeds and lily pads.