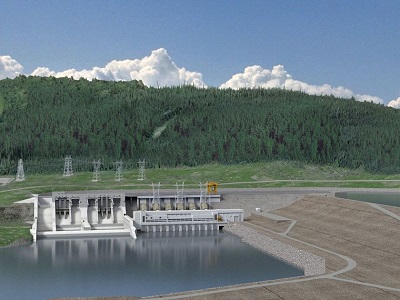 B.C. Hydro has selected a preferred contractor for the Site C generating station and spillways, work that is expected to cost well over $1 billion.

The contract with Aecon-Flatiron-Dragados-EBC Partnership still has to be finalized, with the award of the contract expected to be complete by the end of February. Work would not begin until the spring.

In an announcement, B.C. Hydro said should a final contract be reached with Aecon-Flatiron-Dragados-EBC (AFDE) Partnership, Hydro’s board of directors would need to sign off on it.

The work on the powerhouse, penstocks, spillways and power intakes for the dam is the second largest contract for the project. At peak construction, anticipated to be in 2021, there would be about 1,600 people working on the generating station and spillways.

No details on the cost of the contract were available from Hydro, but the Crown utility said the proposal from AFDE Partnership falls within a revised estimated cost for the entire project of $10.7 billion. “The value of the contract will be announced at contract award,” B.C. Hydro spokesman Dave Conway said Tuesday.

Located in northeast B.C., the cost of the hydroelectric dam was revised upward from $8.3 billion when John Horgan’s NDP government announced before Christmas that the controversial project would go ahead.

The decision followed a review of the project by the B.C. Utilities Commission, an election promise of Horgan, whose minority government took power this summer after defeating the Liberals who had held power for 16 years.

While no details on the cost of this latest contract are available, before the new revised upward total cost had been announced, Hydro had budgeted $1.255 billion for the generating station and spillways.