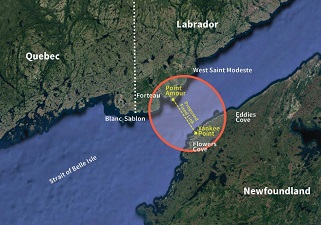 Pre-feasibility study confirms $1.65B underwater rail link between Newfoundland and Labrador could work

A government study into the feasibility of a permanent link between Newfoundland and Labrador is recommending an undersea rail tunnel at a cost of $1.65 billion.

Such a tunnel would take 15 years to complete, Premier Dwight Ball told a news conference Wednesday in St. John’s.

A fixed link tunnel between the two parts of the province has the potential to be a “nation-building project,” said Ball, comparing it to the Confederation Bridge that connects Prince Edward Island and New Brunswick.

“Making a fixed link could truly change the landscape and unify our country,” Ball said.

The findings came from a government pre-feasibility study into a fixed link for travel between the island and mainland parts of the province.

A public-private partnership, similar to the Confederation Bridge, is a strong possibility to finance the tunnel, said Ball, who added that a project of nature would require “significant partnerships.”

Ball also said that he’s open to a partnership with Quebec for the tunnel, and will meet with that province’s premier on Thursday to discuss a fixed link and mining-related investment.

The $266,000 study, completed by consulting company Hatch and the Harris Centre at Memorial University, was announced in 2016.