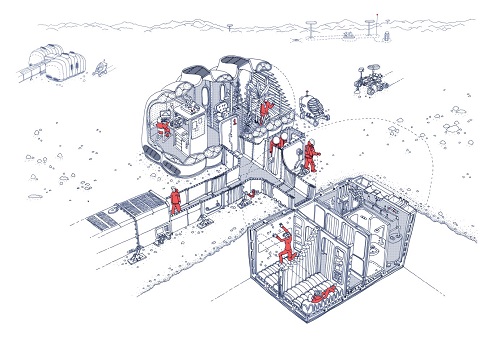 Having been responsible for designing Britain’s Antarctic Research Station, in addition to many other polar bases, Hugh Broughton Architects certainly knows a thing or two about keeping humans alive in harsh conditions. The firm is using this experience to imagine what would be required to shelter humans on Mars with a new experimental housing project.

The project is named Building a Martian House and is being constructed in Bristol, England, with local docklands standing in for the Martian landscape. It’s led by local artists Ella Good and Nikki Kent, in partnership with Hugh Broughton Architects and Pearce+, and is funded by the Edward Marshall Trust. The overall idea behind it is to explore ideas on how we could eventually live on Mars.

The dwelling will measure a total of 40 sq m (430 sq ft), which will be spread over two floors. The lower level is envisioned as being buried below the Martian surface and will contain flexible living spaces that can be used as bedrooms, or a dining room, or even a Virtual Reality room to try and stave off boredom.

Elsewhere would be a bathroom and kitchenette, plus areas to support a hydroponic grow room and air filtration. The upper level will consist of some kind of gold-coated foil, chosen because it would be lightweight to transport to Mars, which would be inflated and filled with Martian soil.