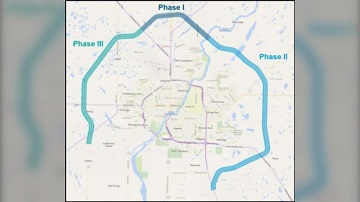 As reported on CTV News, a picture of what a possible perimeter freeway around Saskatoon could look like is becoming clearer.

The city’s transportation committee will review a report from the provincial government and the Ministry of Highways about the ministry’s plans for a 55-kilometre twinned freeway bypassing the city.

It would run from Highway 11 south of Saskatoon, skirting along the city’s north and west, to the Yellowhead Highway and Highway 7.

The plan calls for 16 interchanges along the freeway, five railway overpasses, one major river crossing north of Saskatoon and at least two flyovers.

The ministry proposes a three-phase plan to study and finalize a design for the freeway, which it plans to have completed in 2021.

As is stands there is no timeline for a final decision regarding the freeway’s construction.

Public open houses presenting different options for the freeway are scheduled for later this year.