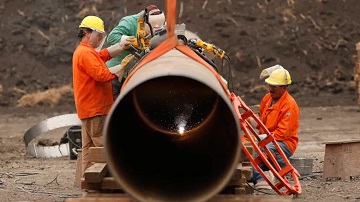 A major pipeline project — long anticipated by the Canadian oilpatch — reached a significant milestone Sunday as Enbridge’s Line 3 pipeline from Alberta to Manitoba is now up and running.

Calgary-based Enbridge sees commercial operation of the Canadian portion as important progress, even as the U.S. portion of the pipeline replacement project is still navigating Minnesota regulators.

“It has been a long road,” said Leo Golden, the vice president in charge of the Line 3 replacement project.

“It has been, I would say, a challenging road at times for sure, but … we have achieved something that we are all very proud of in terms of putting this in service.“

The Line 3 replacement is the largest project in Enbridge history, with a total cost expected to top $9 billion, of which the Canadian portion is about $5.3 billion.

The company has operated Line 3 since 1968, shipping oil from Hardisty, Alta., to Superior, Wis. The Canadian portion of the line runs from Hardisty to Gretna, Man., a distance of 1,067 kilometres.

Plans to replace the aging pipeline — using pipe made from thicker, stronger steel and protected by an improved exterior coating — began to be discussed in 2013.

Following regulatory filings, the federal government signed off on the multi-billion dollar project in 2016, while on the same day rejecting Northern Gateway, another Enbridge pipeline.

On the U.S. side of the border, the Line 3 project is still working its way through regulators.