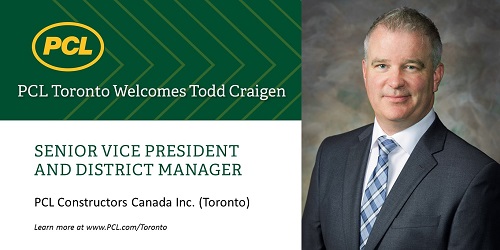 Toronto, ON (November 6, 2017) – The PCL family of companies is pleased to announce the appointment of Todd Craigen to senior vice president and district manager of PCL Constructors Canada Inc. (Toronto).

Reporting to the president of Eastern Canada, Jim Dougan, Todd has overall responsibility for PCL’s operations in the Greater Toronto Area and southwestern Ontario, and succeeds Mike Wieninger, who has transitioned to PCL’s North American headquarters as chief operating officer of Canadian Operations, as announced on November 1, 2017. Vice president and district manager Bruce Sonnenberg and district manager Kelly Wallacesupport Todd in overseeing PCL Toronto, the largest district within the PCL family of companies.

“Todd has made significant contributions to the procurement, management, and successful execution of a number of high-profile projects across Canada,” said PCL president and CEO Dave Filipchuk. “His focus on creating successful outcomes for our clients’ unique needs, combined with his senior operations management experience, positions Todd to drive our Toronto operations into the future, while influencing a culture of innovation that pushes the industry forward.”

Todd brings nearly 25 years of construction industry experience to Toronto. In 1996, he began his PCL career as an estimator in the Regina district, and in 2000 moved to the Ottawa district where he was promoted to manager of its Special Projects division. In 2006, Todd moved to the Winnipeg district to take on the role of construction manager for the iconic Canadian Museum for Human Rights (CMHR). In 2012, Todd was promoted to district manager of PCL’s newest district at the time, Saskatoon. Most recently, Todd held the position of vice president and district manager responsible for PCL’s operations in the BC Region.

Todd has served in a volunteer capacity on the United Way cabinet and several construction association boards; most recently joining the Ontario General Contractors Association’s board of directors in September 2017.

PCL is a group of independent construction companies that carries out work across Canada, the United States, the Caribbean, and in Australia. These diverse operations in infrastructure, heavy industrial, and buildi​ngs markets are supported by a strategic presence in 31 major centres. Backed by PCL’s 111-year legacy, and with more than four decades of experience in Southwestern Ontario’s dynamic construction market, the Toronto office is PCL’s largest district with more than 550 of the construction industry’s most-talented professionals and an annual construction volume of more than $1 billion. For more information, visit PCL.com/Toronto.