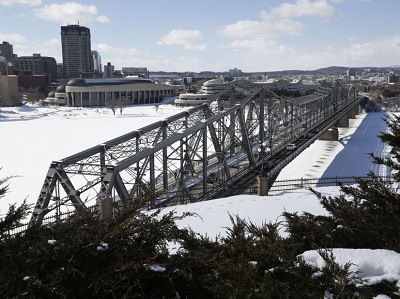 As reported in the Ottawa Citizen, a national capital bridge battle has been revived by the Liberal government, to the chagrin of mayors on both sides of the Ottawa River.

Tuesday’s federal budget proposes to kick-start the process to create a new interprovincial bridge, threatening to reopen old wounds from the last time the federal government, two provincial governments and two municipal governments tried to find a location to build a new crossing between Ottawa and Gatineau.

And if the National Capital Commission didn’t have enough on its plate with the redevelopment of LeBreton Flats, the federal government has tapped the agency to take the project’s lead “by refreshing existing studies and developing a long-term integrated interprovincial crossing plan.”

Both Ottawa Mayor Jim Watson and Gatineau Mayor Maxime Pedneaud-Jobin said they were surprised by the mention of an interprovincial bridge in the federal budget.

Watson said he has “no desire” to go down the road of another fight over where to put a crossing — a proposal to locate a Gatineau-connecting bridge over Kettle Island in east Ottawa was shelved almost six years ago after community uproar.

“I think the top-down approach failed a few years ago. We have to try another approach,” said Pedneaud-Jobin.

He disagreed with the budget’s assertion that there is a “demonstrated need for an additional National Capital Region crossing,” and said both Ottawa and Gatineau are instead focused on investment in their public transportation infrastructure, including interprovincial links between light rail transit systems in both cities.

“I think that should be the priority, not starting a process about a future bridge,” said Pedneaud-Jobin.

There might be immediate pressure to build another crossing, however.