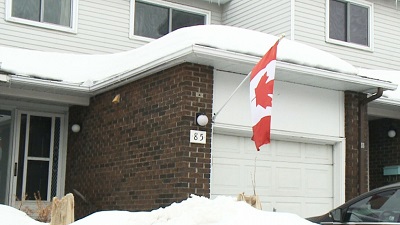 As reported on CTV News, Maj. Mike Mitchell says his west-end condo developer ordered him to remove a Canadian flag and its pole from his garage.

Mitchell said he had the flag up on its pole since just before Canada Day of last year. He says he had received no complaints about the flag or its pole until Tuesday morning.

Mitchell received an e-mail from AXIA Property Management saying that he was required to remove the flag and its pole by the end of the week.

The board informed Mitchell items are not permitted to be fastened to the exterior of the units as per the Rules and Regulations which state “….no structure or appearance shall be erected on or fastened to any unit.”

After a response by Mitchell asking for clarification on if he could still hang his flag up without the pole, AXIA Property Management said:

“You can find another way (if it follows guidelines of the Rules and Regulations) but it cannot be attached to the exterior of the unit”.

Mitchell said he was a little surprised that there were rules to putting up flag poles. He claims somebody made a complaint to the developer to take it down.