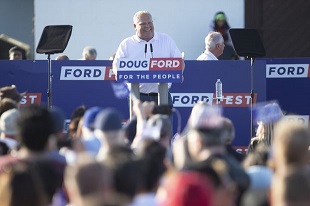 As reported in The Globe and Mail, the Ontario government has cancelled a plan to build affordable housing on a piece of unused provincial land in Premier Doug Ford’s Toronto riding, saying the original deal wasn’t good enough.

Under a plan announced by the then-Liberal government in 2017, the vacant 11-hectare site of the Thistletown Regional Centre – once a children’s mental-health facility – was supposed to become an 800-unit housing development, with 160 homes offered at rents at or below average market rent. Another 80 units at the site, which is near the intersection of Kipling and Finch Avenues in northwestern Toronto, were to be made available under an affordable-ownership scheme.

But after Mr. Ford’s Progressive Conservatives were elected last year, the deal with Mattamy Homes and two non-profit agencies was quietly scrapped.

The site, which is in one of Toronto’s poorest neighbourhoods and along the route of the proposed Finch West light-rail transit line, costs the government $1.2-million a year to maintain its deteriorating buildings and keep them secure.

Richard Clark, a spokesman for the Premier, said the previous government’s deal on Thistletown failed to produce both enough affordable housing – and enough cash for Queen’s Park.

“We believe that the proposal accepted by the previous government dramatically undervalued Thistletown in terms of both revenue for taxpayers and the potential for housing that’s affordable,” Mr. Clark said in an e-mail.

He said the government was reviewing all of its real estate for sites suitable for either affordable housing or long-term care homes, and that no decision has been made on what to do with Thistletown.