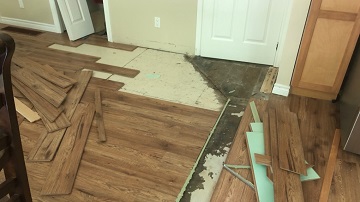 An Ontario family who was forced to move out of their new home when they discovered it was infested with toxic black mould will be able to afford a rebuild after the province’s home warranty program stepped in.

In June 2018, Bridget Austin, her husband Mike, and their two young daughters moved from Grisby, Ont. into what they believed would be their “dream home” in Port Sydney, Ont., located about a two-hour drive north of Toronto.

However, within the first few weeks of living in the home, the couple’s two young daughters developed consistent fevers and one of them was diagnosed with strep throat.

Soon after, the family uncovered what appeared to be mould lurking beneath their floorboards when they were renovating the kitchen. They also found the fungus growing in the basement ceiling, behind the baseboards, and even in the cold air return.

A specialist confirmed their suspicions after taking samples from the home. The results revealed the home was infested with stachybotrys, or toxic black mould, and it was unsafe to live in.

“They basically deemed our house a tear-down,” Bridget Austin told CTVNews.ca in June. “They said that there is no amount of remediation that can be done to fix this home.”

After they moved into a rental unit in nearby Huntsville, Austin said they learned the home was not as new as they were led to believe. Neighbours in Port Sydney said construction on the home had started in 2006 – not 2016 as the Austins were told.