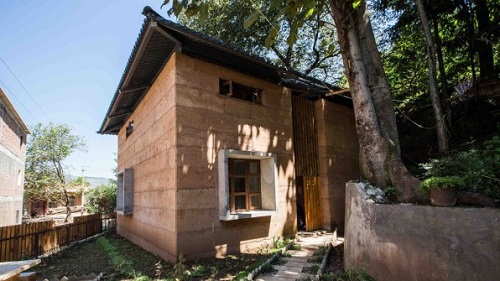 Over 80,000 houses were reduced to rubble and more than 120,000 were damaged  when a magnitude 6.1 earthquake struck southwestern China, in 2014. Large-scale reconstruction initiatives are still underway and one of them–a small-scale experimental housing prototype–has received the prestigious Building of the Year award from the World Architecture Festival.

Designed by The Chinese University of Hong Kong, the Post-Earthquake Prototype takes rammed earth, a traditional building technique, and strengthens it with steel and concrete. The idea is that new buildings constructed with this technique would incur less damage from the next earthquake, helping communities bounce back faster.

Rammed earth–a low-tech, inexpensive building method that involves packing mud and using it for walls–has been around for centuries. Homes in Ludian County, where the prototype is located, were traditionally made with this technique. While cost effective and easy to build, rammed earth offers little seismic protection. Post-quake, communities began using brick and mortar construction to rebuild, but the materials became too expensive and unsustainable to scale. Using reinforced rammed earth solved the affordability problem.