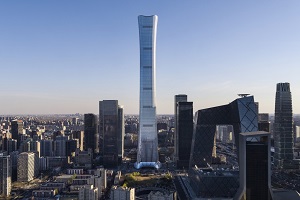 One of world’s tallest skyscrapers opens in Beijing

As reported on New Atlas, shortly after the inauguration of one of the world’s largest airports in Beijing, the city is now host to another massive new building, this time a skyscraper by Kohn Pedersen Fox (KPF). Now officially open for business, the CITIC Tower rises to a height of 528 m (1,732 ft), making it the 10th tallest building worldwide.

The CITIC Tower also involved TFP Farrells and Arup, and is located in Beijing’s business district, a stone’s throw away from the CCTV building. It draws on the country’s ancient past for design inspiration and its overall form echoes that of the zun, which is a ceremonial drinking vessel used in Bronze Age China.

Additionally, it increases the amount of office space available at the very top, which is unusual for such a tall building. Most supertall skyscrapers taper or at least maintain the same width as they rise, due to the heavy wind loads that batter towers at such great heights.